Posted on September 9, 2011 by winelibertarian 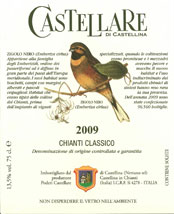 Recently we had lunch in Melbourne at Giuseppe, Arnaldo & Sons and had a bottle of 2009 Castellare di Castellina, it was impressive, a very approachable Chianti Classico, from what is believed to be an exceptionally good vintage. Even though it was drinking well at lunch (we ordered 2) this wine still has the potential to develop further in the next few years, prompting me to purchase 6 bottles from LaVigna at what I would consider a bargain price for this quality of Chianti Classico.

Also this last week while dinning at Purl in Subiaco we had a bottle of 2010 Coldstream Hills Chardonnay it was a plump and luscious Chardonnay with white melon on the palate that was balanced by a touch of lemon citrus and minerality that makes for a great food wine that was not bad at filling in the space while waiting for entrees to arrive. I have to add that JA who is no great fan of Chardonnay, having once referred to this noble grape as nothing more than mouth wash, washed down more than his share. We followed the Chardonnay with a Cape Mentell Trinders, disappointed, would not bother drinking again, a very average bulk style wine with no expression of its origins.

Sunday BBQ lunch (first for the season) at Acepfv’s house a 2010 Penfolds Bin 23 Adelaide Hills Pinot Noir was supplied by the host, now I’m not a fan of Adelaide Hills Pinot Noir, so tasted this with a bit of trepidation and was rewarded with Chocolate and Cherry liqueur on the nose which was followed through onto the palate, though it did not have that full mouth feel that a top notch Pinot can have (maybe it lacked some oak to flesh it out). This is a wine well suited to drinking over lunch on a spring day. This was followed by a 2009 Oyster Bay Pinot Noir supplied by Cookie, not much needs to be said about this wine, apart from the fact that the New Zealanders have bulk wine down to a fine art. A simple and well structured expression of its origins, this is easy drinking full bright cherry flavoured Pinot.

Just had to add this rather enthusiastic review from Oyster Bay’s website.
“This is brimming with flavour, balanced on a pin and simply scrumptious. Look for a perfumed array of involved aromas with dark berry fruit, earthy tones, floral notes and spice box predominant. It bathes the palate with well-structured balanced flavour—briary berry, racy red currant and blood plum. It’s medium weight and gorgeously textured with a charming fruit-filled aftertaste. Lovely sipped on its own, it’s also delicious paired with duck—smoked breasts or terrine. ”
Vic Harradine, Canada, 9 July 2011

Finally my contribution to the BBQ a 1997 Alkoomi Blackbutt, (43% Merlot – 38% Cabernet – 19% Malbec) Great cork that came out with a pop so we were full of great expectations, but alas this wine had gone and died long before we could drink it. This does happen with older wines, but it is still always a disappointment, anyway on the bright side it did have a great cork! We ended up with a cleansing ale and smoked some Cuban Cigars.

1997 Alkoomi Blackbutt
From my collection, some ridiculous price $65.00
If purchased from Langton’s now $30.00 (my shares are thankfully preforming better as an investment)
Alkoomi